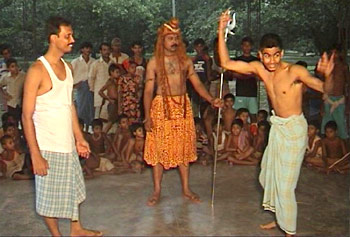 Ghambira is a devotional folk dance which is very popular in West Bengal.It is performed during Chadak festival in the month of March-April. It is known as a devotional folk dance because it is performed to worship Goddess Shakti. It is known as Ghambira because it is performed at the hall of dance of Chandi Mandir and is called as Gambhira. This people believe that this hall has been constructed as an exbhition area. This art is a mixture of dance, music, songs and dialogue which transforms it into a folk play. 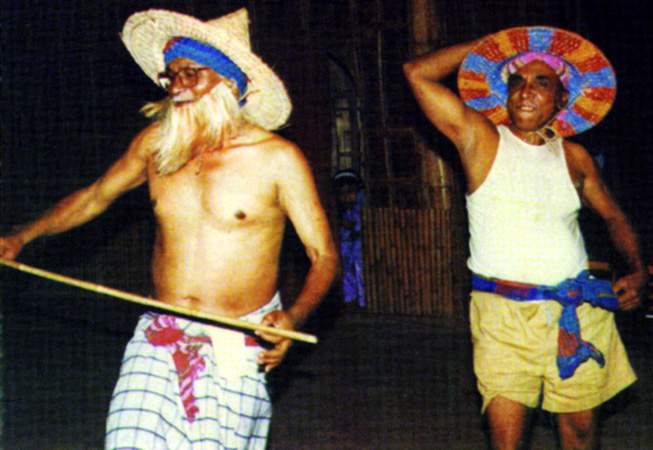 There are only two dancers who perfrom this dance. One of them is called the Nana (maternal grandfather) and the other is known as Nati (grandson). Both of them use dailouges to express their feelings and show their role in the society in financial and physical aspects. The dialogue can be in the form of prose or verse. This dance is also known as narrative Ghambira. When the chorus repeats the two actors dance on the music.

Another kind of Ghambira which focuses on God and Goddess is known as primary Ghambira. This is used to worship Lord Shiva and Parvati (also known as Goddess Shakti).

The instruments used for this dance includes the harmonica, flute and drum, with the one of the performers (nati) wears strings of bells around his ankles.

The songs sung during the performance are known as Ghambira songs whose name is similar to the dance. The song is accompanied by a chorus. The singers are standing in the backstage.
The costumes wore in the performance are very simple. Both of performers wear lungi. The gray-bearded grandfather wears a mathal i.e.straw hat on his head and holds a stick in his hand. Whereas, the grandson wears a torn jersey and has a gamchha, a local checked towel that is tied round his waist.

The culture of state of West Bengal has is influenced a lot by the folk dances. These folk dances represent the beautiful culture, colourfulness and festivity.  It is not popular now a day but it is still performed in the Rajshahi region of this state.