Tripura is a state in North East India. The Tripuri Tribes originated from Tripura and Bangladesh. Tripuri tribes belong to the famous Tibeto-Burmese tribal group. A tripuri wedding is very different from a regular wedding. The rituals followed by these people are also very distinct. Here is a bit of information about tripuri wedding culture. 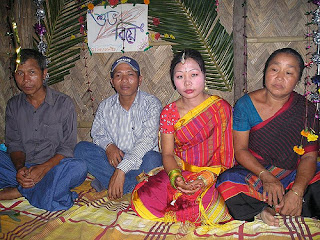 A marriage broker plays a vital role in a tripuri matrimony. He is known as Raibai or Andra. The decision of marriage is the whole and sole of the parents. If the parents disagree the process ends here. The bride or the groom has no choice. They have to agree with the decision of the parents. This type of marriage always take place in the house of the bridegroom. If the girl is chosen by the groom parents the bride parents demand a sum of money and ornaments. It is a custom in tripura that the girls does not bring dowry to his husbands home. This custom makes tripura free from dowry system.

This is the preliminary proposal for marriage from one of the parties. If the proposal is accepted by both parties then they fix a date for a final settlement called Kokswhngmung. Raibai play a vital role in theses type of marriage. He fixes the brokerage in the koksurma.

This is the process in which marriage is finalised. Both the parties commit to get their ward marriage. The guardian of both sides sit side by side in front of two pots of rice beer called bwtwk. A bell-metal plate containing some cotton, durba, copper coin, rice, soil etc. is put in front of them to perform the rituals of Dangdua, performed by each person three times. The would-be bride then comes before the assembled persons and bows before the elders. The dates and times, terms and conditions of the marriage, bearing of expenditure etc. are finalized in this kokswhnglaimung. It is a custom that the bride has to wash the hands of all the old people present on the occasion. In addition to that she has to bathe her would be parents.

Khum Phunukmung
Once the marriage is finalized the every family member of the village is called by invitation. The invitation is given orally by offering betel leaf, nut and flower etc. This ritual is started from the village head that is also known as Chokdori. Once the date is fixed for the matrimony the bride is brought to the groom house. She is welcomed with enthusiasm, and dangdua.

A day before the marriage the bridegroom party invited Aya and two boys for carrying water by offering a betel.