A Punjabi wedding is a strong reflection of Punjabi culture. The Punjabi wedding has many rituals which includes many famous Punjabi dances. A Punjabi wedding is also known as Anand Karaj. The religious ceremony has to take place in the Gurdwara or in presence of Guru Granth Sahib, where both sides of the family and friends are heavily involved. The wedding rituals go on for a period of three days.

In this ceremony the couple commit that they are ready for the alliance. A form of prayer known as Ardaas is also offered. Finally gifts are exchanged. 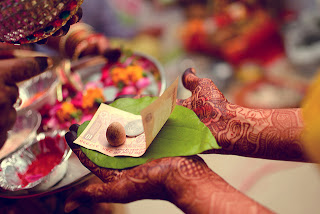 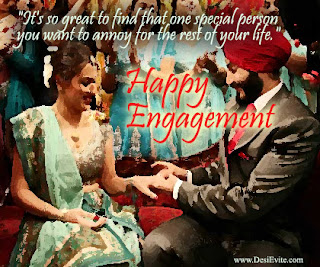 It is the unofficial engagement ceremony. The main purpose behind the ceremony is that the parents want to send the message of alliance to the whole society. The parents of both the sides are present there with present, money. The girl's uncle(mamu) present her the nose ring which she has to wear on the wedding day. They also give blessings to the couple. After Rokka the wedding preparations start. 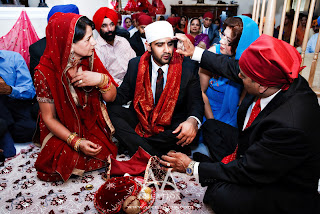 This ceremony starts with tikka ceremony which is conducted a week to ten days prior to the wedding. In it the girl's parents visits the boys house with beautifully wrapped gifts and the tikka material. The tikka material consists of a silver tray with a few grains of rice and saffron in a tiny silver bowl, 14 chuharey (dried dates) covered with silver foil and a coconut wrapped in a gold leaf. The father of the girl applies 'tikka' on his son-in-law's forehead and gives him his blessings and some money. This process is reprocicated by the boy's side. They  girl is draped with a chunni (stole). She is also presented with jewellery. Everyone present congratulates the couple by feeding them sweet. 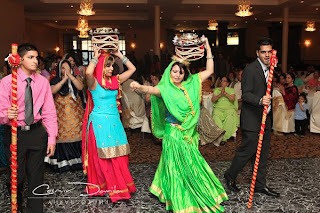 The sangeet is another popular custom where family and friends from both the sides dance and sing to catchy tunes and indulge in a lot of eating and probably even drinking. The Sangeet is combined with a party held at night, with celebrations continuing for the whole night. Sometimes it finishes in the morning. 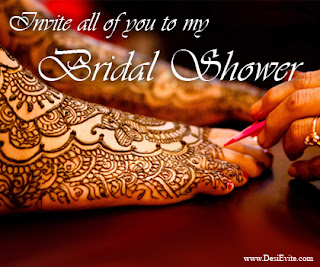 A young nephew or cousin also wears a similar clothing as the groom. He is called the sarbala/shabbala (caretaker of the groom) and accompanies him. 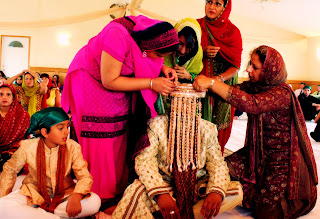 When the groom wears the wedding dress a puja is conducted after which the grooms father ties the sehra on the groom’s head.

It is conducted to keep away the bad omen's. The groom bhabhi lines his eyes with surma. 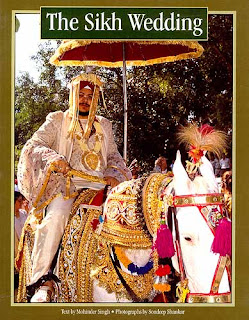 It is the final pre-wedding ritual in which the groom climbs the horse and leaves his home for the wedding venue.