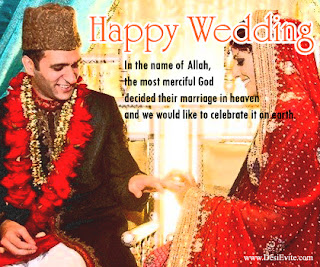 Muslim wedding is an elaborated affair and it extends to a period of five days. The traditions and practices followed in the wedding ceremonies relate to the Muslim world. The people who get involved in these ceremonies have Islam as their faith. Muslim wedding is also known as Nikaah. The wedding can take place at any convenient time. The wedding venue can be the bride or groom's house. The wedding venue can be a place that is convenient for both parties. Muslim culture all over the world is famous for inviting and welcoming guests. This gives them a chance to entertain them. Just as in any other Indian wedding, here too marriage ceremonies can be divided into pre-wedding, wedding and post-wedding celebrations. Here are some of the famous pre-wedding rituals followed in a Muslim wedding. 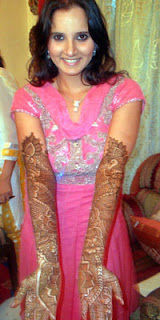 The Mehndi ceremony is the most important ritual of Muslim wedding. It is held at the home of the bride. It can be held on the eve of marriage or a couple of days before marriage. The female relatives of the bride apply mehndi on her hands and feet. The bride wears simple clothes on the day. When this process is in progress the women gathered there sing traditional songs. According to custom the bride must not step out of the house for the next few days until her marriage. 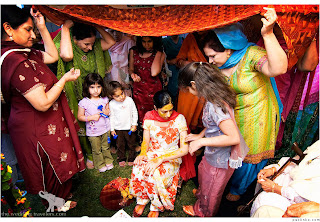 In this ritual the bride wears yellow clothes and turmeric paste is applied all over her body. It is called Mayoon or Mayun or Ubtan or Manja. She is seated on a small square table. It is mandatory that a married friend will accompany the bride everywhere and at all times. After all the ritual associated with Manjha finishes the bride has to take a bath. This is a very lively process and includes a lot of singing.

As in every Indian marriage wedding rings are exchanged. After the exchange is done the bride and the groom commit to be life partner. After Mangni Islamic laws does not allow the marrying parties to have any kind of relationship. It is only after valid Nikah that they become legally husband and wife. If engagement is broken by any of the party, it does not affect the parties anyway. However, the parties prefer to return whatever they have got as gifts. The bride and the groom can't see each other before Nikah. 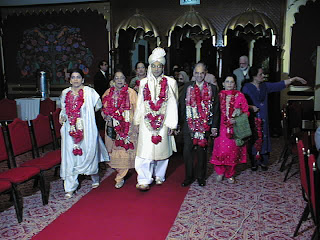 This is a pre-marital custom in which the bride’s family welcomes the groom party. The bride’s sisters play pranks and slap the guests with flowers.