Bhangra: A dance of enthusiasm and playfulness 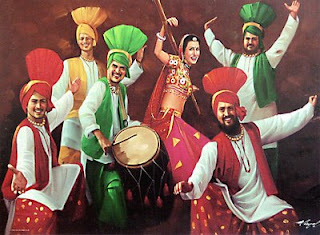 Bhangra a dance of enthusiasm and playfulness originated in the 18th century in Punjab. It got its name from one of the major products of the harvest—bhang (hemp) and that is how bhangra drew its name. This traditional and lively form of folk dance is conducted during the harvest season. This dance is an expression of good harvest. Bhangra is considered the king of dances. It is also performed on the day of Baisakhi. 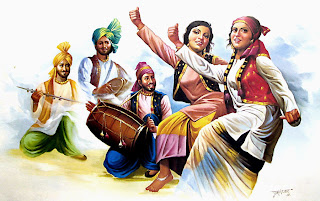 It is performed in a team, involves co-ordination, timing and technique amongst the various team members. The people taking part in this dance move around the circle. At the centre of the circle the drummer is standing. He beats the drums with two sticks. The music of the drum adds enthusiasm to this dance.

Bhangra is one of the most significant traditions of the Punjabi culture because it symbolizes the imagination, talent, potential and charisma of Punjab’s people. Illustrating the sowing of seeds, hoeing, cutting of wheat and the selling of crops in the beautiful choreography, this folk dance remains popular within the villages of the Gujranwalla, Gujrat, Shekhpura, Sialkot and Gurdaspur districts. Simple but vigorous, bhangra is a dance of enthusiasm and gaiety. 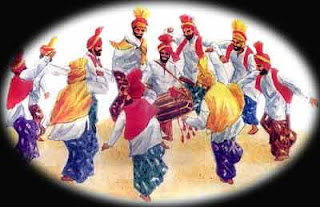 The dance is accompanied by music. It is a combination of music from a dhol, folk singing, and the chimta (tongs). The songs are small couplets written in the Punjabi language called bolis. The speciality of the singer is that the person must have a high, energetic tone of voice. 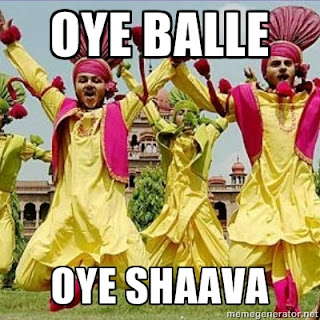 Men wear a chaadra while doing bhangra. It is a piece of cloth wrapped around the waist. Men also wear a kurta, which is a long shirt. In addition, men wear pagri (turban) to cover their heads.Women wear a traditional Punjabi dress known as a salwar kameez, long baggy pants tight at the ankle (salwar) and a long colorful shirt (kameez). Women also wear chunnis, colorful pieces of cloth wrapped around the neck. These dresses make this dance vibrant, representing the rich rural colors of Punjab.

This dance is moving quickly to all divisions of class and education, eventually becoming a part of weddings, New Year parties, and other important occasions. This dance form is very popular in countries like North America, UK. It is marketed by music corporations as a source of revenue in the form of cassettes and CDs.Commercial Bhangra groups came into being in UK and other places and performed this Bhangra dance.