Adivasi marriage system is very different from a general Indian marriage. There are some practices like winning of the bride by capture, purchase, service to the parent, elopement- negotiation which fascinates people. They want to know more about this type of marriage. Payment in various forms is made for bride price. Adult marriage is the usual practice. A marriage means a lot to Adivasi. Marriage is seen as a roadmap of prosperity and start of new life. Marriages in Adivasi are pure and sacred. All the customs are followed. 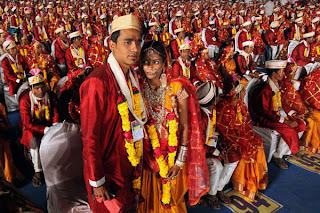 They are few people who play a vital role in matrimony. Raibaar is the middleman who mediates in initiating talk about marriage proposal to either family. He is known by both the families.  Majhi  is the headman of village.

Orah duar njel: Visiting of parents and relatives to each other’s home  Once both the families agree for the alliance, they visit each other. During the visit they would examine the condition of living, status and other things but also check how the family members are and presenting themselves in front of other family members. For a fair judgement they take the relatives along them. Once they return home they discuss their observation and decide whether to go on with the proposal or not.

Taka chal: Express decision to Manjhi and arrangement of marriage.Both the families convey their decision to Majhi. The majhi would give a green signal for the marriage preparations. Taka Chal is the custom included with the process.  In this process groom’s family has to hand over meagre money to bride’s family.

Newta: Invitation to relatives and final preparation of marriage Family members will be busy inviting their relatives, friends, near and dear once. But first invitation is always to the Majhi.