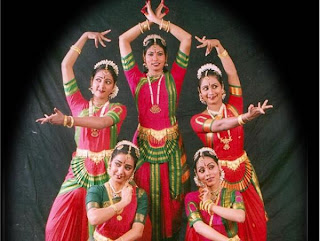 Kuchipudi is the classical dance form which belongs to Andhra Pradesh, India. It derived it name from the village of Kuchelapuram, a small village about 65 kilometres from Vijaywada, Andhra Pradesh.

A legend is related to the association with the origin of Kuchipudi. He was an orphan and was raised by the villagers. He was married in the childhood. Later he went to Udipi for Vedic studies.  During his study he acquired the name Sidhendra Yogi. When he returned to village the villagers told him to take the family responsibilities on his shoulder. He has to swim to reach the village where his family was staying. As he was swimming he realised that he is tired and can't swim any further. He prayed to the god for strength. Somehow he reached the shore of the river and thanked God. Latter he devoted his life to the service of God. He then settled in the village of Kuchelapuram and started teaching. 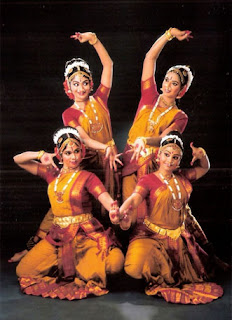 Kuchipudi is group performance which requires a troop of dancers and actors. A dance performance was presented in open air on a highly decorated stage. Earlier the female roles were played by boys and young men of comely appearance. The director of the stage played the key role. He was the conductor, dancer, singer, musician, comedian, all rolled into one. The play begins with music which included Mridanga, Madala and a pair of cymbals, followed by a prayer to a deity and appearance of Ganesha, the elephant headed god to bless the performance. Then came the dancers offering worship to the Flagstaff or Flag of Indra. The director then announced the theme of the play, introduced the characters in his sing-song voice and appealed the audience to witness the show with attention. This marked the end of the prelude and the beginning of the play proper. Kuchipudi dancers are flexibler and very clever, rounded and fleet-footed, they perform with grace and fluid movements. 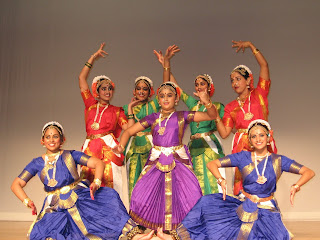 Today Kuchipudi is considerably a different style of dance form than it originally used to be. Over 2,800 Kuchipudi dancers, including 200-plus natyagurus created a Guinness World Records on December 26, 2010 performing Hindolam Thillana at the GMC Balayogi Stadium in Hyderabad.

A number of people were responsible for moving it from the villages to the performance stage.  One of the most notable Uma Murali.

Uma is a brilliant dancer with excellent skills. She began her training in a tender age of five. Latter she devoted herself to Kuchupudi. She portrayed the character of Madhavi in Silapadhigaram the “Magnum opus’ production of Shri Madurai. R. Muralidaran . She received innumerable titles and accolades for her outstanding skills and fluency in this dance field. She has represented Indian Classical Dance in International festival. Uma has amused audiences with her unique style of dance.