Garba: A colourful, musical and energetic folk dance of Gujarat 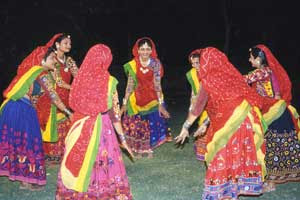 Garba Dance is a popular folk Dance of Gujarat. It is the leading dance of women in this part of the country. It is more similar to the classical Indian dances such as Bharatanatyam and Odissi. The word Garba comes from Sanskrit. Garbha means "womb" and Deep "a small earthenware lamp". This dance has some similarities to other spiritual dances, such as those of Sufi culture.  This dance is performed by ladies on the Navaratri days which are auspicious days of Goddess Durga in the Winter Months. 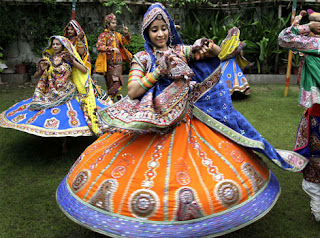 This dance is organised in an open space i.e in a club or at the street corners. The participants stand in a circle, around an idol or photograph of the goddess that is kept in the center. The dance in mood begins with beats in slow tempo. As the dance proceeds, the energy level of the participants increases due to the fast beat and tempo of the music. The music is synchronized by a drummer who stands in the center of the dancers. The dance can be of the length of three hours which can be expanded to dawn. It depends on the people convenience. The music played can be the devotional songs of Goddess Durga or it can be the remixed songs with a fast beat and tempo from movies. 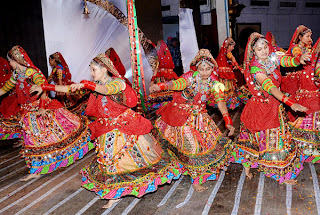 The costumes worn during this dance is very colourful.  The females wear  Chaniya choli, a three-piece dress with a choli, which is an embroidered and colorful blouse, teamed with chaniya, which is the flared, skirt-like bottom, and dupatta, which is usually worn in the traditional Gujarati manner. The chaniya choli looks very attractive because they are decorated with beads, shells, mirrors, stars, and embroidery work, mati, etc. In addition to that the girls also apply makeup on their face and put bindi on their forehead. They also wear bangles on their wrists. In addition to that they wear payal on their knees which make a pleasant sound why they dance. 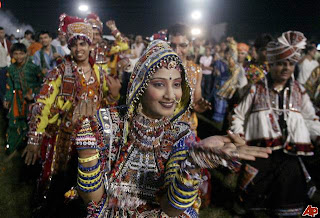 This dance is influenced by the Daniya Ras. Only difference is that Garba is played by hands. The dance steps involve singing and clapping with both hands. The bodies of the participant gracefully bending sideways while every step and arms coming together in beautiful sweeping gestures in different directions. Where almost always all the movement ends in a clap is a distinct feature of this dance. 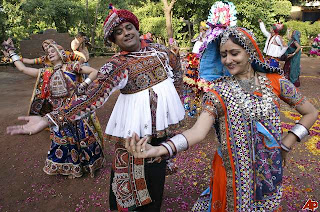 This dance has a religious aspect also. The participant dance around a clay lantern with a light inside, called a Garbha Deep. This lantern is the symbol of life. In general Grabha mean a baby which signifies life is in a mothers womb. This dance honours the feminine Goddess Durga who is the symbol of power.

Garba is not only popuplar in India it is now being appreciated worldwide. This dance form is very popular in the United States.