Bharatanatyam is a classical Indian dance which has roots attached to southern state of Indian Tamil Nadu. It is one of the oldest dance forms of India. Bharatanatya gets its name from the initial of the following words 'Bha' - Bhavam (means expression), 'Ra' - Ragam (means music), 'Ta - Talam (means beat or rhythm) and Natyam (means dance). Bharatanatyam is knwon for its grace, purity, tenderness, and poses.It was known as "Daasiyattam" since performed by Devadasies in temples of Tamil Nadu long ago.Today, it is one of the most popular and widely performed dance styles and is practiced by male and female dancers all over the world.Bharatnatyam can be found out in many scriptures in which apsaras are found out to perform Bharatanatyam the heavenly dance. It is based on Natya Shastra, the Bible of the classical Indian dance.It is a dance which pleases the senses. It is a dance which is realated to Bhakti. It was brought to the stage for public performance after 1930. 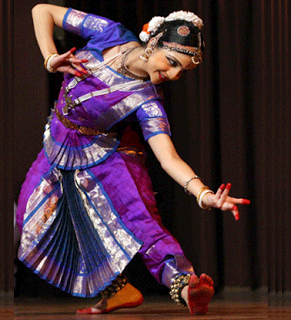 The costume worn during the stage performance is paijama and jacket of Kanchipuram silk and Banaras silk. The dancer wears a lot of ornaments of shining stones on neck, ears, hands, and head, jasmin garland in the hair and foot trinklet with small bells. 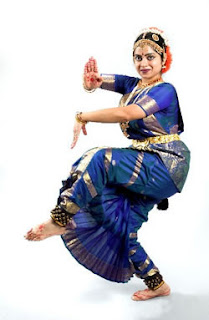 The music of Bharatanatyam is based on Carnatic classical music. The instruments used are Veena, Flute, Mridangam and Violin.A song called 'Vaaythari' is sung during the performance. A solo dance performance of Bharatanatyam describes two aspects. First, lasya, the graceful feminine movements, and tandava the dance of Shiva. A dance performance consists of elaborate gestures which includes movements of limbs, sentiments, emotional states and actions. Bharatanatyam dancer often portrays Shiva's characteristic pose of Nataraja.

It is a way of worshipping the lord. It can be considered as a combination of mythological, historical, cultural and sociological heritage. It gives lot of happiness to the performer as well as the audience who enjoy it with involvement.

The female dancer also known as 'narthaki' in hindi performing the dance should possess certain qualities like she should be youthful, slender, beautiful, with large eyes, with well-rounded breasts, self-confident, witty, pleasing, well aware of when to dance and when to stop, able to follow the flow of songs and music, and to dance to the time (thalam), with splendid costumes, and of a happy disposition.

A program of bharata natyam usually lasts two hours without interruption and includes a specific list of procedures and it is mandatory that the dancer cannot leave the stage during the performance. In addition to that she has to wear the same costume during the whole performance.