Marriage in Nagaland is centred around many interesting beliefs, facts and principles that are rooted deep within the tribal people of the state. Marriage takes place in the Church. The date of marriage is fixed during the engagement. During courtship the boy and the girl and their respective parents has to live a clean and prayerful life. 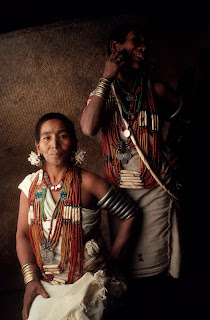 There are two forms of marriage—one ceremonial, the other non-ceremonial. The ceremonial involves many rituals and many guests are there to witness the events. The non-ceremonial is a simple one. It involves taking the bride to the grooms house where she stays for a single day.

Naga weddings don't last for many hours. After the lunch buffet people tend to leave. Organising a Naga wedding is a huge operation taking months and months of planning.

There are some interesting rituals followed in a wedding. The couple decides to marry without the consent of the parents. They get married in the middle of the night. This remains a secret. In the morning when they see their daughter carrying the load of fire to the other house they come to know that their son or daughter has tied the nuptial knot. The groom's friends play a vital role in this type of marriage. With the help of his friends the groom brings the bride to his house.

Another rituals states that the young boy expresses his desire for marriage. He also informs his choice. The father of the boy sends a friend to the girl’s house to know the willingness of her parents. If the bride's parents agree for the matrimony the bridegroom's father puts the matter further to the test by strangling a fowl and watching the way in which it crosses its legs when dying. If the legs are placed in an inauspicious attitude, the match is immediately broken off. Otherwise the girl is informed of the favourable progress of negotiations. At this stage, she can exercise a power of veto, as if she dreams an inauspicious dream within the next three days, her suitor must search a bride elsewhere; if all goes favourably the wedding day is fixed.

This is a very interesting ritual. After the boy and the girl were engaged, they went on a trading expedition for twenty days. If the expedition was profitable, the marriage preparations were proceeded with, but if there was a loss (it was considered as inauspicious omen) the engagement was broken off.