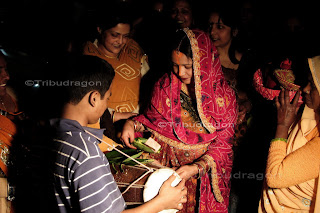 Sikkim is an Indian state located in the Himalayan Mountains. Sikkim mostly has a Nepalese population. People belonging to Bhutia and Limbu can be found in small numbers. Due to different caste of people residing there different wedding cultures are followed there. Marriage outside the community is allowed.

The marriages are mostly arranged by parents or result when a boy elopes with a girl. Asking for a girl's hand, that is the most important ceremony. In that system, the girl can ask for anything and an unlimited amount of gold, silver, etc. This confirms to the girl's family that the boy is financially secure enough to keep their daughter happy. Few days after the wedding, the boy's family members have to visit the girl's house with a piglet and some alcoholic and non-alcoholic drinks depending upon the financial standard of his house. The key ceremonies of a Limbu wedding take place in the groom's house rather than that of the bride's because girl has to stay with her husband. 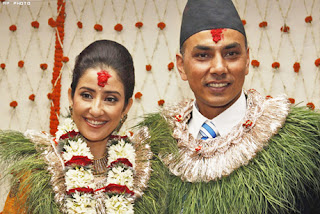 The Nepalese appeared in Sikkim after Bhutias. Weddings generally take place in tender age in Nepal. The wedding procedure usually begins with an arrangement of a boy and a girl with suitable backgrounds. A priest is called for matchmaking. The meeting takes place between the parents of the two families. In an arranged marriage, it is the parents who choose their children's partners. Even though the parents choose the individuals, the children are commonly given a right to accept or reject the match. This process is followed for arranged marriage. After the initial marriage arrangement takes place, the wedding begins with a gathering of the traveling party at the groom's house. 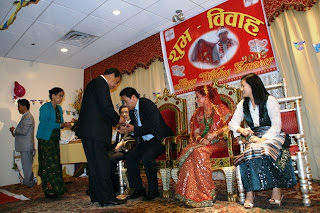