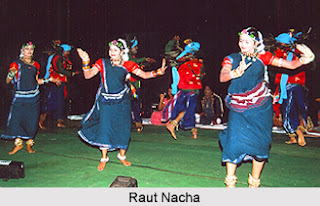 This dance is performed by the people of “yadavs/yaduvanshis” community. The dance is symbol of gratitude towards Lord Krishna. He helped the yadavs to overpower the army of evil king Kansa. The dance is performed in order to show the happiness of victory of good over the evil. The dance form closely resembles the “Raas Leela” dance form. The best occasion to perform the dance is the time of “dev udhni ekadashi”. It is believed that it is time of awakening of Gods after brief rest according to Hindu pancang (calendar).

The dance can be performed in an open space or on a big spacious stage. The dancers dress themselves in colourful and glittering costumes. As this drama dance depicts the battle between the cruel king Kansha and Lord Krishna wielding sticks and metal shields can be found in the hands of the dancers. This combination makes the imaginary drama real to watch.

They dance to the tunes produced by the folk instruments and occasionally get into a mock duel. The bells tied to their waist produce the extra feel needed for the festive occasion. The couplets of Kabeer and Tulsi are also recited during the dance performance. The dance is a group performance.

This dance also shows the different battles fought in the ancient times. This is the reason why this dance form involves a lot of imagination skill in order to perform it. It is performed with great innovative and imaginative ideas.

The dance plays are very popular and worth watching. It ties the people to the olden culture which is getting lost in the fast pace lives.