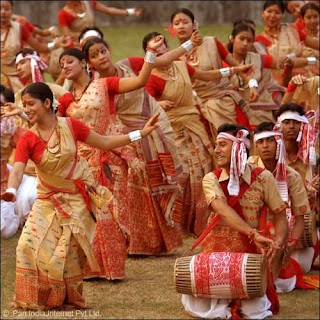 Bihu is a folk dance form which belongs to the state of Assam. It is very popular and has become a part of the people habitant in the state. This dance is performed during the Bihu festival which is celebrated thrice a year. Rongali which is the biggest of the three Bihu festivals makes the Bihu dance more special. This festival is celebrated in the middle of April. This is the time when the spring season is on its full charm. This dance form is a mirror of Assamese culture. This dance is a celebration of Good harvest.

There is no historic evidence when this dance form originated but it was first cited to be when Ahom king Rudra Singha invited Bihu dancers to perform at the Ranghar fields sometime around 1694 on the occasion of Rongali Bihu.

This is a group dance. It is performed by both men and women. When the dance starts the female dancer group themselves into line or circle. The males dancers and musicians enter the performance area first and form a straight line. Latter the women enter the dancing area. Once the female dancers enter the arena the male dancer break their line and mingle with them. The dance is usually characterized by definite postures, movements of the hips, arms, wrists, twirls, squats and bends but no jumps. Male and female dance movements are very similar, with only minor but subtle differences.

The music played during the dance performance is the traditional Bihu dance. The dance is accompanied by songs which are known as Bihu geet. The lyrics of these songs ranges from welcoming the Assamese new year to describing the daily life of a farmer, from historical references of invasions to Assam to contemporary socio-political commentary in a satirical way. 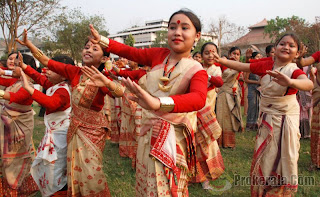 The musical instruments used in Bihu dance are Dhol, Pepa, Gogona, Sutuli, Tal, and Taka. More than one Dhol can be used during the dance performance. It is slung from the neck of the drummer during the performance. The drummer plays the dhol with sticks or hands. Flutes are also used for musical composition.

The men wear Dhoti, Gamocha (towel) and chadar and mekhala. They tie the towel at the bottom of their stomach and put the chandar on their shoulder. The women wear colourful sarees for the performance. The colourful attires make the dance vibrant to watch.

The bihu dance can last for many hours. It is performed in open space. The dance is characterised by rapid change in rhythm, mood, pace and movements. In addition to that the dancers have a limited time for presenting their skills.

This dance is an expression of both happiness and pain. This makes it magnificent to watch.