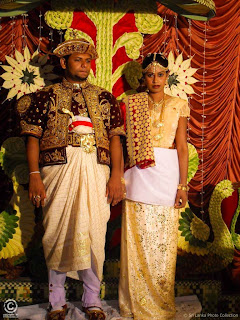 In Sri Lanka you can have a civil wedding, Christian wedding, Buddhist wedding or Muslim wedding. There are varying styles of Sri Lankan wedding and these change in accordance with the region. Here we are going to get familiar with a traditional Buddhist marriage. The stages of the entire marriage take about 45 minutes. The boy’s parents present the formal proposal of marriage to the girl's parent. If both sides agree the horoscopes are matched. If matched the boy visits the girl’s family for the first time where he gets a chance a meet the girl. Rings are exchanged on this occasion.

‘Nekath’ is the auspicious times when the wedding would be conducted. It is derived from the horoscopes of the Bride and the Groom which is created based on their dates and times of birth. The events conducted during the wedding are guided by ‘Nekath’.

The Poruwa ceremony appears to have existed in Sri Lanka before the introduction of Buddhism in the 3rd Century BC. The Poruwa ceremony was a valid custom as a registered marriage until the British introduced the registration of marriages by Law in 1870. Today's Poruwa ceremony has been influenced by both upcountry and low country customs of Sri Lanka.

It is the most important ceremony in a Sri Lankan wedding. The bridegroom and party assemble on the left of the Poruwa and the bridal party on the right. The bride and groom enter the Poruwa leading with the right foot. They greet each other with palms held together in the traditional manner. Betel leaves are offered to gods. Seven betel leaf bundles are offered to the God. The groom holds the tray while the bride takes one sheaf at a time and drops it on the Poruwa. The groom repeats this process. This is a custom carried out to remember seven generations of relatives on each side. Next, the bride’s father places the right hand of the bride on that of the groom as a symbolic gesture of handing over the bride to the bridegroom. Now the maternal uncle enters the Poruwa and ties the small fingers of the bride and groom with a single gold thread which symbolizes unity and then pours water over the fingers. The groom presents a white cloth to the bride and she gives it to her mother. This is an expression of the groom's gratitude.

The bridegroom arrives in procession at the prescribed auspicious time, accompanies sometimes by drummers and dancers. The bride’s brother washes the feet of his brother-in-law, and the bridegroom responds by presenting him with a gold ring which is he drops into the basin of water. Also at a prescribed time the bride arrives. After the arrival of the bride the bridegroom puts a chain around the bride’s neck and a wedding ring on her finger.