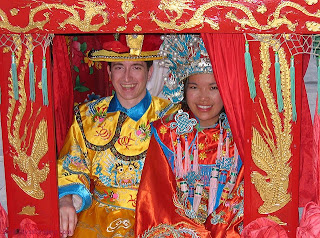 In Tibet free love is common between young men and women and the most interesting thing is that the parents don't interfere in their child's will. The girl and the boy start dating secretly. Public gatherings are considered appropriate occasions for boys to meet girls. After a certain point of time the boys takes the initiative and tell his decision to his parents.

Before communicating his decision for marriage the boys would collect all the information about the girl like mouse, ox, tiger, rabbit, dragon, snake, horse, sheep, monkey, chicken, dog or pig. Now he would approach an astrologer to check if her attributes are compatible with his. If the astrologer shows a green signal he would go to his parents and tell them about the girl. If the parents are ready they would approach the girl’s family with gifts which includes Khatag, chang, Yak Butter Tea. If the girl's parents have no objection they proceed to the engagement.

Both the parties would sit together and decide a day for the engagement. This ceremony is held at the bride's house. On this pleasant day the boy has to send Khatag and other gifts to every member of the bride's family. Parents of the couple are present on the occasion. They would also exchange gifts. Next they would read the duplicate betrothal contracts and the other will check them after that. They will then sign the contracts with the seals of the two families and pass them to both sides. Both the parties would proceed to a banquet organised by the bride's parents. When the guests leave they would be presented with Khatag.

Before the wedding, the lady's family will choose an auspicious day to send dowry to the man. A small steel statue of Bodhisattva, a roll of sutra along with a stupa is send to the groom’s house. The man's family, on the other hand, has to send a set of costumes to the lady for her wedding on the wedding eve.

A person with good reputation is chosen. He along with a group of riders are designated the task of fetching the bride.

Before the arrival of the bride, the groom would have the gate decorated and a cushion of barleys laid in front of his house.