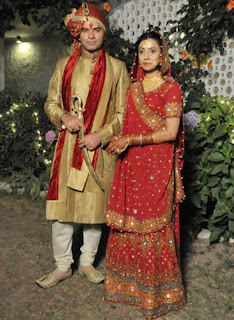 In this rituals the prohits of two sides meet and decide the whole schedule of the marriage. They choose the appropriate dates for the further rituals. Two copies of the schedule are prepared. The copies are then handed over to the each side. These copies are called laganotri. It is a custom to pay a certain fees to the priest. This laganotri has a great significance as it prescribes the time when first ornament or cloth is to be prepared. In addition to that it also contains the suitable time for the collection of food. This is also known as sarvarambha muhurat.

This ritual is performed seven, five or three days before the marriage.  It occurs at both the sides. In this ritual both sides invite their close relatives and one person from each house of the village. The list is prepared by the village prohit, barber and some people from the village. Next invitations are sent to these people. It is a custom to send invitation in odd numbers.  On the other hand ladies from the village assemble at the bride’s home and sing songs and dance.

This is a most important ritual which occurs on the day or two days before the marriage. In this ritual the groom’s sister or sister in law offers arti. Tilak is applied on the forehead of the bridegroom.  At the bride’s side maternal uncle is called. He is a special invitee. The bride’s mother receives him. He also shares some of the financial status which is called as ‘dharm dan’.

It occurs three, five or seven days before the marriage. Batna is applied to the bride and groom at the respective home. It is a paste made from barley flour, turmeric, orange and mustard oil. According to the tradition the special paste batna is applied by relatives turn by turn. Mehndi is also applied on the hand and feet. The mustard oil remaining is applied on the hair of the groom. This custom is known as chhota tel.

It is performed during the night time a day before the marriage. The suitable time is calculated by the priest. The priest conducts a haven. The planets, Lord Ganesh and kalash are also worshipped. They are worshipped to invoke their blessing for a hassle free termination of the marriage. This ritual is performed by the both the parties at their respective home.